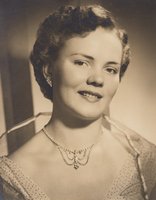 Born May 18, 1932 in New Westminster to Helmi-Elizabeth and Ilmari Kyllonen. Predeceased by her parents and older brother, Art, as well as an older brother, Colorvo, whom she never met, who died crossing the Atlantic, on the way from Finland to a new life in Canada. Music was always an important part of Mom’s life. In her youth, she sang in many music festivals and starred in several musical productions, played piano in a dance band, and later directed both senior and junior choirs at church. She was always happy and willing to share her love of music, and her grandchildren remember trips to the Vancouver Symphony with Grandma, and dancing to “Boogie-Woogie” piano at family gatherings.
In 1950 she was crowned “Miss Delta” and studied to become a legal secretary, where she worked in a New Westminster law office until she married Henry, the love of her life, in 1954. Then her work-life changed to running the office of C&amp;L Logging until retirement, usually with the company of one of her beloved spaniels sleeping under her desk. Mom and Dad were so happy to be together to celebrate their 65th wedding anniversary on June 4th, the same day their youngest great grandchild, Price, was born. Throughout her life, Mom bravely faced and battled numerous life-threatening health issues, never losing faith, through the good times and bad, that God would give her strength. She had plenty of Finnish “Sisu”, (grit and determination), and did her best to pass that on to her children and grandchildren. She taught us through courageous example to persevere, and that giving up is not an option.

For the last 38 years of her life, her name became “Grandma”, and she was the quintessential grandmother who loved and welcomed all with a warm hug and special treats, and valued each and every child as a special gift from God.
Mom is survived by Henry, her husband for over 65 years, her daughter Karen (Tom), and son Dan(Debbie). She will be missed by all her grandchildren and their children: Dayton (Stephanie) with Brandt and Price; Lindsay (Jim) with John and William; Nicole (Mike) with Emma and Tanner; Rylan (Katie) with Greyer and Senna; Jesse (Zoelea) with Ryland, Mya, Abigail and Hanna; and Kaitlyn (Greg). Mom lived her life with a gentle grace, always putting others ahead of herself, and everyone who met her, remembers her kindness and optimism. She passed peacefully, surrounded by family who will miss her and will always remember her with gratitude and love.
A celebration of Viola Carlson’s life will be held at Garden Hill Funeral Chapel in Maple Ridge at 10AM on Saturday, November 23rd.