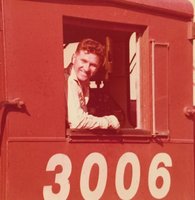 With great sadness, we announce the passing of Bill Langston. He is greatly missed by his

Brayden. He was predeceased by his son Brian.

He was born in Winnipeg, Manitoba and his family moved to Haney, B.C. in the 1940’s. Bill

years, providing much entertainment and excitement around town. The Langstons had many

great stories and memories from their boxing days.

At 26, Bill met Greta Labree at one of the popular Saturday night dances at the old Albion

Hall. It was love at first sight and they were married soon after on May 5, 1956.

Bill began working for CP Rail during the early days of steam engines. He enjoyed a very

successful career as an engineer for over 40 years.

Bill was a skilled carpenter and built many houses during his off time. He was a devoted,

loving husband and family man. Bill was always blessed with good health and led a vibrant,

active life. When not attending hockey and softball games, dance and music recitals, or

school events, he was busy with his garden and his woodworking projects.

Bill was a character and he will always be remembered for his unique, playful sense of

humour. Bill loved to play crib, have a drink and laugh. His spirit will be greatly missed by

Bill was one of a kind. Whenever we see a CP Rail train go thundering by or hear the

familiar whistle in the distance, we think of him. Gone, but not forgotten.