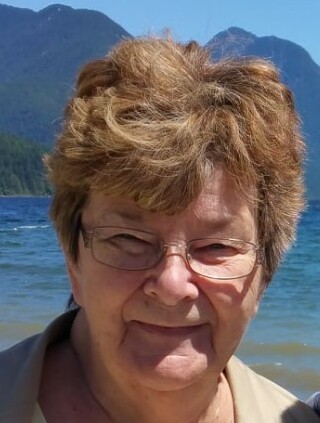 Helen Alice Gingera (née Taylor) was a loving and caring friend, partner, wife, mother, grandmother, and great grandmother.  She left this world suddenly on December 20th, 2021 at her home in Maple Ridge, British Columbia (BC) at the age of 85.  She had been looking forward to Christmas and to 2022 when she’d hope the pandemic would abate and family could reunite.

Helen was born September 9th, 1936, in Montréal, Quebec, the only child of Elizabeth Taylor (née McCoy).  Elizabeth (Betty as she was known to her sisters, and latter “Nan” to the grandkids) was originally from West Tottenham from the country of Middlesex, England and who took a steamship from Liverpool to Canada where she fell in love with and married James Taylor, an officer in the Canadian military who fought bravely in two wars and later held a position on parliament hill representing the queen just before he passed.  When he was not deployed, Jimmy, would greet his daughter Helen as she would get off the school bus along with the loyal family dog, Major.

As a child, Helen had many friends and would look forward to visiting her neighbour, Oscar Peterson, who would play piano for his friends on the block.  Betty was an excellent cook and catered to some influential families in Montréal including the Birks the Bronfmans, the Roities and the Roundtrees.  While Helen did not keep up her mother’s culinary skills, she did have a knack for numbers and upon graduating high school, she enrolled in commercial studies at Alliance Business College where she excelled at accounting and shorthand and quickly rose through the administrative ranks in Montreal’s post-war industrial boom.

Never one to keep still, Helen was tall, slim and feisty and caught the eye of an enlisted Air Force private, amateur boxer and to-be husband, Edward Gingera, who she married on October 13, 1956.  Helen and Ed shared many a summer at their cottage along Baie Misisquoi with Ed’s large family where many happy memories were made.  In the early 70’s, they headed west to Alberta with their two daughters, Linda and Apryl, son Jeffrey, and Nan, bouncing between Edmonton and N.E. Calgary, before finally putting down roots in the community of Sherbrooke in N.W Edmonton.  Ed excelled in sales and Helen settled in as a legal secretary, a career she retired from after 21 years of service.

As empty nesters, Helen and Ed along with Nan, moved to Terrace in north-western BC and together with daughter Linda and her husband Mike, took an entrepreneurial leap in 1993 to purchase and operate the Copper River Motel which included jeep rentals, a convenience store, gas pumps and an ice business.  Nan passed away in January 2001 and shortly after Ed succumbed to lung cancer in 2007, Helen moved down to Maple Ridge, BC.  Helen met her caring partner, Bob Lakin whom she enjoyed spending winters with in Apache Junction and Sun City Arizona and alternating summers in BC and Maine.  Helen enjoyed browsing estate auctions and antique shops and reading period novels and crime thrillers, especially those written by John Grisham.  She particularly enjoyed Wednesday Tea with the ladies in her condo complex and taking in the views of nature from her balcony.

She is predeceased by her beloved husband Edward and her parents, James and Elizabeth.

She is also survived by her cousin Joyce Hallett and an extended family of nieces and nephews.  She will be forever loved and never forgotten.  May we all become better human beings because of the influence Helen had on all our lives.

Due to current public health orders regarding the pandemic, a public service is unable to take place at this time.  A Celebration of Life is being planned later in 2022 (and when pandemic travel restrictions allow) for people wishing to pay their respects.  In lieu of flowers, donations to the Kidney Foundation of Canada would be appreciated by Helen’s family.

Those we love don't go away, they walk beside us every day.
Unseen, unheard, but always near.  So loved, so missed, so very dear.