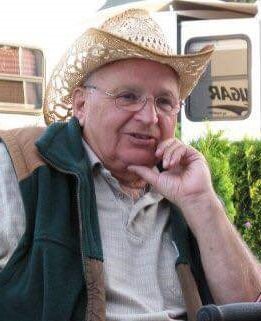 April 21, 1935 – June 9, 2019 Born in Krupp, Saskatchewan He is predeceased by his parents Henry Albrecht and Frieda Neitz. He married Cathy Van Aert in 1957 and together they raised 4 boys. He was a hard worker, passing this trait on to all his boys. Al was a hobby farmer. He ran his own Shell station in Coquitlam before hiring on to Coquitlam Automotive to run their machine shop, finally retiring in 1997 at the age of 62. He and Cathy loved to travel and losing his leg to cancer did not hinder that, driving across Canada twice, with their little dog sitting between them in the truck. His loss is deeply felt but he will live forever in our hearts and memories, and when we look at the legacy he has left behind in the eyes of his grandchildren and great-grandchildren. He is survived by his wife Cathy; 4 children, Henry (Michelle), Brian (Mary), Christopher (Donna), Michael (Lisa); 12 grandchildren; 9 great grandchildren; as well as many friends and family. Funeral Mass will be on Saturday, June 15th at 10:30 AM at St. Patrick’s Catholic Church – 22561 121 ave, Maple Ridge. Interment to follow at Maple Ridge Cemetery. In lieu of flowers, donations to the would be greatly appreciated.
To plant a tree in memory of Alvin Albrecht, please visit Tribute Store
Services for Alvin Albrecht
There are no events scheduled. You can still show your support by planting a tree in memory of Alvin Albrecht.
Visit the Tribute Store

Share Your Memory of
Alvin
Upload Your Memory View All Memories
Be the first to upload a memory!
Share A Memory
Plant a Tree