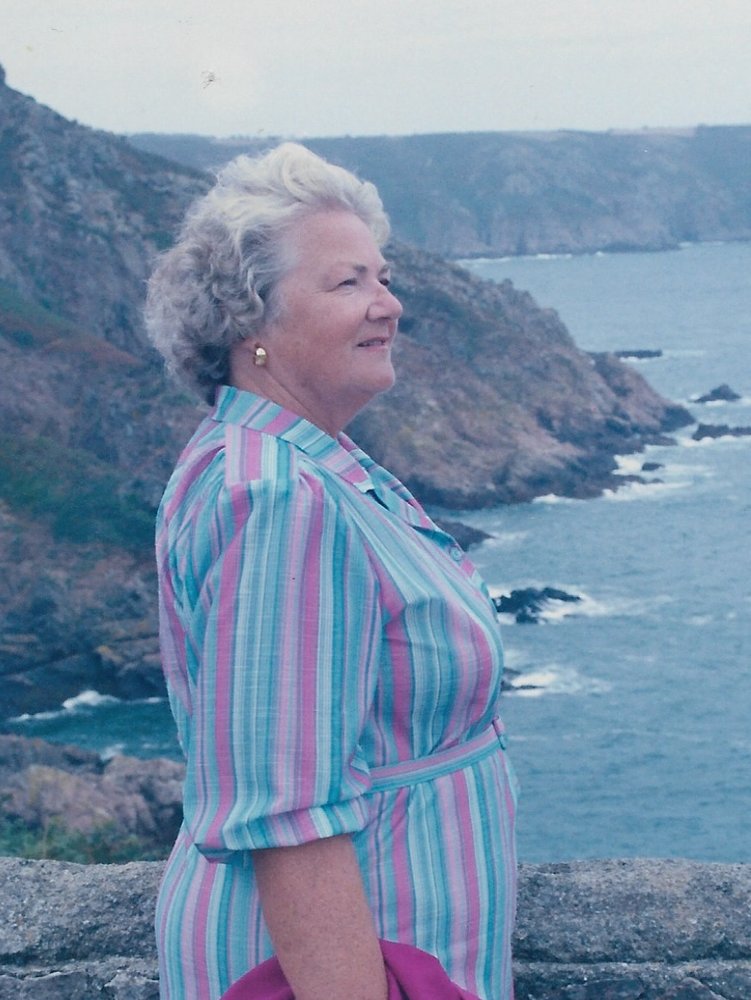 Obituary of Dorothy May Le Page

Predeceased by her beloved husband John, Dorothy is survived by her children, son Neville (Pam) and daughter Caroline, as well as her grandchildren, Katelynn (Troy); Bradley; Daniel and James; and her great-grandsons, Nathan and Brayden.

Dorothy was born in 1925 on the beautiful Island of Guernsey in the Channel Islands, and no matter how far away she was, or how long she was absent from the Island, thoughts of it never ever left her heart. It was always her “Sarnia Cherie”.

In late June of 1940, Dorothy was thankfully given a spot on one of the last evacuation ships to leave Guernsey, just before the German Forces landed and occupied the Channel Islands for the next five years. During WWII, Dorothy proudly served with the British Navy (W.R.N.S.), in England, and once the Channel Islands were liberated she returned to Guernsey, where she met John. He had also returned to the Island after serving in the Royal Navy. They were married on September 21, 1955, and the newlyweds immigrated to Canada in October of the same year.

Dorothy and John spent 40 happy years living in a wonderful neighbourhood in Thornhill, Ontario, where they enjoyed raising their children, participating in community activities, and spending time with many very special friends.

Once both Caroline and Neville had taken up permanent residence in BC, and frequent visits had been made to spend time with them and the four grandchildren, Dorothy and John decided to leave Ontario and settle in Maple Ridge, BC, in 1996. Dorothy immediately made friends in her new community and quickly became a very active member of several local groups. She is well remembered for her vibrant energy, her enthusiasm and sense of humour, plus her willingness to sing anywhere, anytime, but particularly when on stage with the Silvertones Choir and Variety Plus, through the Ridge Meadows Seniors Society.

Also as a proud member of the Ex-Service Women’s group, and a regular attendee of meetings at Royal Canadian Legion, Maple Ridge Branch #88, some of Dorothy’s fondest moments came each November when she proudly donned her uniform and marched in the Maple Ridge Remembrance Day parade. For many years she also represented the Legion at several local school ceremonies honouring Remembrance Day, where she is known for reading “In Flanders Fields” to the assembly.

Dorothy will be deeply missed by all of her family in Canada, England and Guernsey, and she is remembered fondly, and with big smiles, by her many friends in Ontario and BC.

A Memorial Service for Dorothy will be held at Garden Hill Funeral Services, 11765 224th Street, Maple Ridge, on Saturday, November 23, at 2pm. We invite you to join us to share in the love and laughter, as we bid a fond farewell to Dottie.

In lieu of flowers, we request that donations in Dorothy's memory be made to your local Seniors Society, or, please donate your time to visit with a lonely senior; just sit down and chat with them for a while.

To send flowers to the family or plant a tree in memory of Dorothy Le Page, please visit Tribute Store

Share Your Memory of
Dorothy
Upload Your Memory View All Memories
Be the first to upload a memory!
Share A Memory
Send Flowers