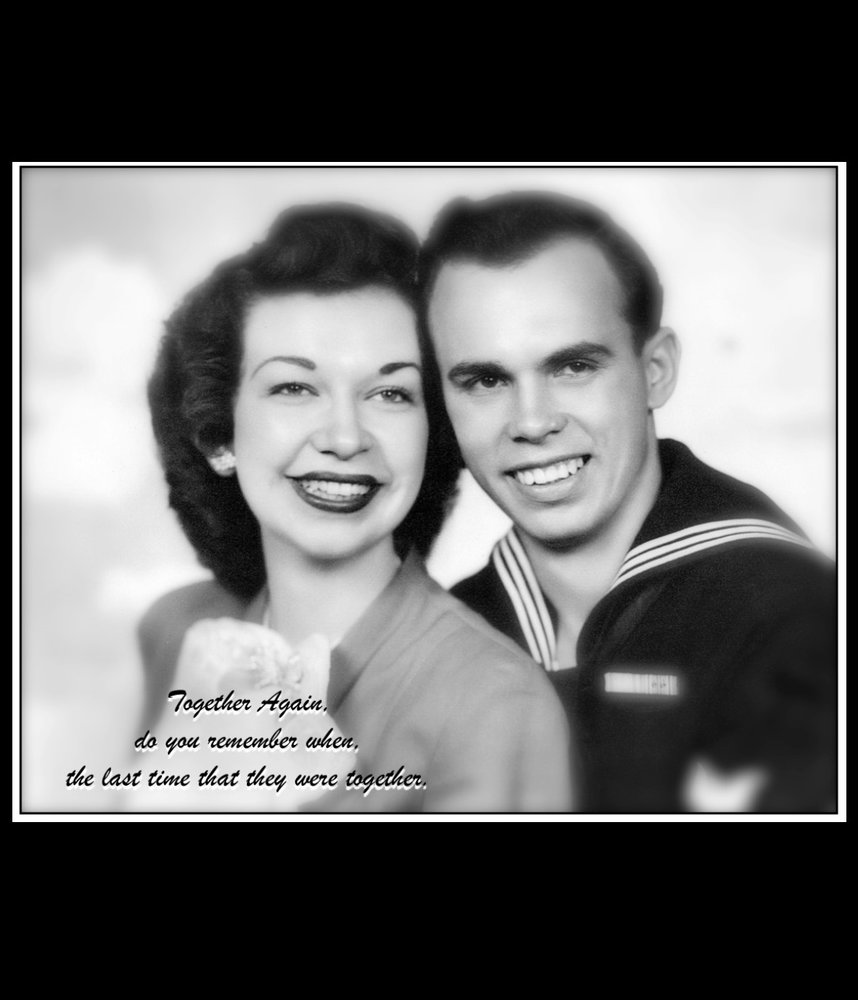 LITTLE, Inez Jean (Preece) May 30, 1922 - January 27, 2020 Together again, do you remember when, the last time that they were together? It is with saddened hearts that we announce the passing of our dear mother Jean Little, also known as “Grandma Jeanie” to many. Jean took ill suddenly and passed away peacefully on January, 27, 2020 surrounded by family at the age of 97. She was preceded by Bill, her beloved husband of 67 years, her sisters Marjorie Taylor, and Barbara Worthington and her parents Mont and Inez Preece. Remembered lovingly by her children and spouses Monty (Cheryl), Sunny (Lynn), Joe (Sandy), 9 grandchildren, 29 great grandchildren, 2 great great grandchildren and numerous relatives and friends. Jean was born and raised in Salt Lake City, Utah in a loving home filled with music and a big collie named Toby. She was a very gifted pianist who could play by ear, an ear that had perfect pitch. Her mother Inez was a well known singer, and sang both with the Mormon Tabernacle Choir and at hundreds of weddings and funerals in the Salt Lake Valley accompanied by Jean on the piano. While attending the University of Utah in 1939 she met Bill Little, who sat next to her in Speech Class. The story goes that Bill, with a full head of dark wavy hair, made the first move. Jean had just finished delivering a stirring speech to the class when Bill, always the smooth operator, said to her “that was very good Miss Preece but don’t you think it was a little over done.” We’re very lucky mom gave him a second chance. Jean would often play songs from the Hit Parade on the baby grand piano in the Student Union building. One day while playing “It Had To Be You” she looked up to see that stuck-up Bill Little leaning on the other end of the piano winking at her. Well as they say, the rest is history. Bill enlisted in the US Navy in 1941 and was stationed in Pearl Harbor during the second World War. Although they were separated by an ocean he would often send her Red Roses, which was immortalized in a song written by Jean called “There’s Always Red Roses.” After Pearl he was sent to New York City to attend Officer Training School but instead of re-enlisting he opted to marry Jeanie in New York on November 3, 1945. Then in January of 1947 their first son Monty arrived, followed by Sherry (Sunny) in 1949 and Joe in 1956 while living in Utah. Jean graduated from the University of Utah prior to joining Bill in New York and pursued a 39 year career as a teacher of elementary and kindergarten age children. After Bill graduated from Columbia University in New York, they returned to Utah and built a house in Bountiful. One of the features of their new home was a 20 by 30 foot school room where Jean started teaching preschool. 25 students in the morning and 25 in the afternoon. Mrs. Little’s preschool was so successful that when kindergarten was introduced in the the school system, the school board enthusiastically let her continue to teach from her home. In 1964 Bill was asked to help launch a new company in Vancouver, British Columbia. Jean and Bill fell in love at once with this beautiful province and moved their family from Bountiful, Utah to West Vancouver. Jean taught 1st and 2nd grade elementary school children in the West Vancouver School District for 18 years before retiring and moving to Maple Ridge. After retiring Jean attended Capilano College where she took a class in writing music. She used that knowledge to publish two song books of her songs, entitled “Little Songs For Little People” and "Lollipops and Soup.” She loved musicals and co-produced with Bill, award winning Road Shows in both Utah and in Vancouver. Jean would write the music and lyrics and Bill would direct and choreograph the dance numbers. What a Team. A product of the Big Band Era Jean and Bill loved to dance and would often clear the dance floor with their flashy moves. They were also avid writers, Jean kept a journal and wrote two books of memoirs, and Bill wrote poetry an a novel. One of the things they loved to do was to travel seeing the sights and culture of Europe, Mexico and Hawaii. They truly loved people and everyone who met them remembered them fondly. The family is overjoyed that they are "Together Again.” A Celebration of Her Life Through Song, will be held at The Church of Jesus Christ of Latter Day Saints on Saturday, February 15 at 2 p.m. - 11750 207th Street, Maple Ridge. The family would like to thank Mom’s wonderful Care Givers and in lieu of flowers, ask that donations be made to the Ridge Meadows Hospital Foundation. www.rmhfoundation.com

Share Your Memory of
Inez
Upload Your Memory View All Memories
Be the first to upload a memory!