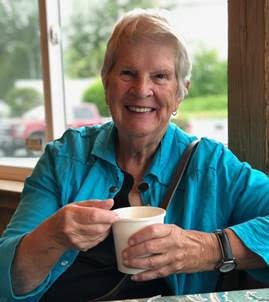 Joyce was born in Singapore to John Rhys Richardson and Kathleen Mary Ruth Richardson (nee Mayer); joining her elder sister Betty.  The family remained in Singapore for another year before going to New Zealand in 1942 to visit Rhys’ parents.  Their visit was extended by the war, during which Joyce was joined by brother Ian and sister Robyn.  In 1947 the family returned to Singapore for a short time before moving in 1949 to Kathleen’s native Canada, and Vancouver where they settled in the Kerrisdale area.  Joyce was the first sibling to leave the family home when she married Sarge Guy in 1959 and moved with him to Washington State, where she had her two children: Sid and Kathy.  She returned to Kerrisdale with Sid and Kathy in 1965 and joined the Hudson Bay Company’s downtown Vancouver store as part of their security team, a job she loved.  Joy worked her way up the Bay’s management team until her retirement in 2003.  During this time, she lived in many different locations around the greater Vancouver Area.  Joy and the children enjoyed the outdoors during summer camping trips and winter cross country skiing.  After retirement she spent several years on the shores of Skaha Lake and then in Chilliwack; where she enjoyed long drives in the countryside and looking at the beautiful mountains.  In 2016 Joy moved back to Maple Ridge to be close to family.  She enjoyed her drives in the area especially Pitt Lake and the mountain views.  Unfortunately, Joy began a multiyear battle with cancer in 2014, which she finally lost after Christmas.

Share Your Memory of
Joyce
Upload Your Memory View All Memories
Be the first to upload a memory!