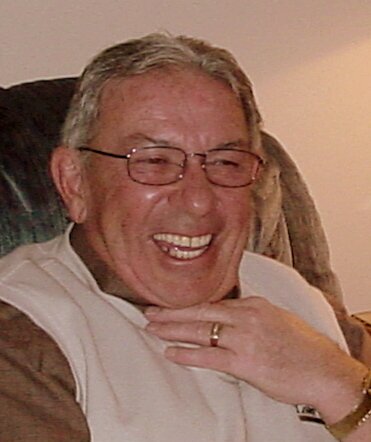 to be reunited with his beloved wife and soul mate, Dode.

No doubt, she greeted him with open arms and a sign that said,

Ed is survived by his Alberta family, including his dear sister, Josie Cholak

and Robert Cholak, and their families. Among numerous other nieces and nephews,

he particularly cherished his brotherly bond with Richard Rusnak, and his wife Joyce.

Ed was predeceased by his father Steve in 1942, his adored mother Ruth (Topechka) in 1974,

his brothers Mike, Floyd and Mervyn; his sisters Olga, and Elsie Taylor;

He will be remembered with fondness by the “Vegreville Brats” with whom he kept in touch,

members of the Pitt Meadows/Maple Ridge business and golf communities,

and his church family at Pitt Meadows United.

Ed was grateful to friends and neighbours for their kindness and assistance,

especially during his past two years of declining health and mobility.

Born in Vegreville, Alberta, he moved to Edmonton in 1957

where he attended Strathcona Composite and Jasper Place High Schools.

Following graduation and a season playing hockey for the Medicine Hat Tigers of the AJHL,

Ed began his long career in the oil and gas sector.

He worked for Haliburton, Shaw Pipe and CEDA, among others,

and developed a number of innovative products,

After his divorce in 1996, he reconnected with Dode, who he had not seen for almost 40 years.

Their love story was epic.

Upon moving to her home in Pitt Meadows, they married in December 1997.

They enjoyed golfing in BC and the California desert, vacationing in Mexico,

and creating a wilderness retreat at Drewry Lake.

They loved entertaining family and friends.

into easy-to-use, highly secure data vaults. It prevents virtually any type of file

To the best of Ed’s knowledge, his encryption technology

has never been decoded or successfully hacked.

His entrepreneurial spirit was driven by his belief that

“if you’re not living on the edge, you’re taking up too much space.”

Over the years, Ed channeled much of his energy into community projects,

including those supported by the Rotary and Chamber of Commerce,

He was kind, compassionate and generous.

Ed was proud of his Ukrainian heritage, and was known to burst into song,

especially at Christmas and Easter. He loved having friends over for feasts

In accordance with Eddie’s wishes, there will be no memorial service

and cremation was entrusted to Garden Hill Funeral Chapel.

Donations in his memory can be made to Operation Smile or Pitt Meadows United Church.

Ed concluded his eulogy to his brother Merv, with wise words to live by:

“In closing and as a reminder to all, life passes too quickly.

each one of you is blessed with will give you strength and comfort.”

Eddie and Dode are Alberta Bound to join their mothers.

To send flowers to the family or plant a tree in memory of Edward Rusnak, please visit Tribute Store
Online Memory & Photo Sharing Event
Online Event
About this Event