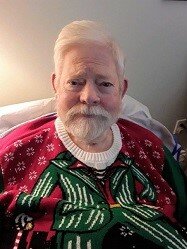 Please share a memory of Dennis to include in a keepsake book for family and friends.
View Tribute Book

It is with our great sorrow that we share Dennis Moyer’s passing on his 77th birthday. Left to mourn are his wife of almost 50 years, Ellen Moyer (nee Worfolk), his sister Sheryl, and his brothers Keith, Glenn, and William. His numerous extended family, including nieces, nephews, great nieces and great nephews, and many friends, also mourn his passing. He was pre-deceased by his parents and brothers, David and Larry.

Dennis was born in Duncan, BC and moved to Hammond, BC at age six. He met Ellen through family friends in Hammond in 1966. They were married in the fall of 1971.

Dennis had many interests including a love for family, food, and football. He spent much of his career cooking including owning a small café in Maple Ridge. He passed on his knowledge and passion for food and cooking during family gatherings to his nieces and nephews. He would even allow the use of his chef knives once these nieces and nephews took over cooking at these gatherings (under his strict supervision, of course!).

Dennis was a quiet man likely because his wife’s family talks far too much. This all changed as soon as topics such as cooking, history, football (Canadian and American), and western and mystery television shows were discussed. Stamp collecting was also one of his interests long after it was fashionable. His knowledge of history, especially of World War I and II, was extensive. He would even out-talk his wife’s family if this was the conversation topic.

In lieu of flowers, please donate to Ridge Meadows Hospital Foundation or a charity of your choosing. Due to the pandemic, there will be no service at this time.

Share Your Memory of
Dennis
Upload Your Memory View All Memories
Be the first to upload a memory!
Share A Memory