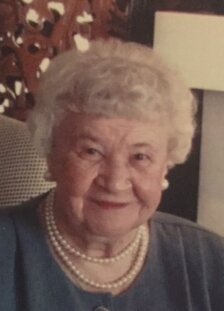 Please share a memory of Olga to include in a keepsake book for family and friends.
View Tribute Book

It is with deep sadness that we announce the passing of our beloved mother, sister, grandmother, and great grandmother.  Olga was one of four siblings born to Evdokimon and Paraskeva Petrucyk in Kobrin, Poland on April 20th, 1924.  She survived the hardships and displacements of the second world war and shared her stories often.  Olga had travelled to many parts of the world including, Asia, Africa, Europe, and Australia.  She immigrated to Canada with her husband, John (predeceased) and three children, Kimon, Nico and Maria in 1956.  They eventually settled down in Maple Ridge where they raised their family and became involved in the restaurant business.  Olga was hardworking, generous, loyal, and talented in so many ways.  Whether it was sewing, knitting, crocheting, or cooking; she was great at it all.  She was famous for her home-made perogies and had immeasurable love for her family.  She could always crack a good joke and her grandchildren and great grandchildren were the light of her life.  Olga leaves behind her three children, Kimon (Wanda), Nico (Paddy), and Maria as well as her four grandchildren Laskarina (Anastassi), Olga (Dean), Christos (Miriam), Chad (Sheena) as well as her 12 great-grandchildren Eugenia, Faith, Lucas, Maria, Isaac, Sophia, Angelo, Thomas, Arianna, George, Mason and Layton.  Olga is survived by her oldest sister, Sophia of Burnaby and younger sister, Nina of Australia and pre-deceased by her brother Mike and sister Anna.  Our family would also like to extend our outmost appreciation to the staff at Fort Langley Seniors Community as well as the dedicated and compassionate staff at the Al Hogg Pavilion for making her last days comfortable.  We are so grateful for all of you and what you do.  To our dearest Yaya, we will miss you incredibly.  Thank you for everything you gave, did and sacrificed for us.  May your memory be eternal.

To send flowers to the family or plant a tree in memory of Olga Venturis, please visit Tribute Store
Monday
28
February

Share Your Memory of
Olga
Upload Your Memory View All Memories
Be the first to upload a memory!
Share A Memory
Send Flowers