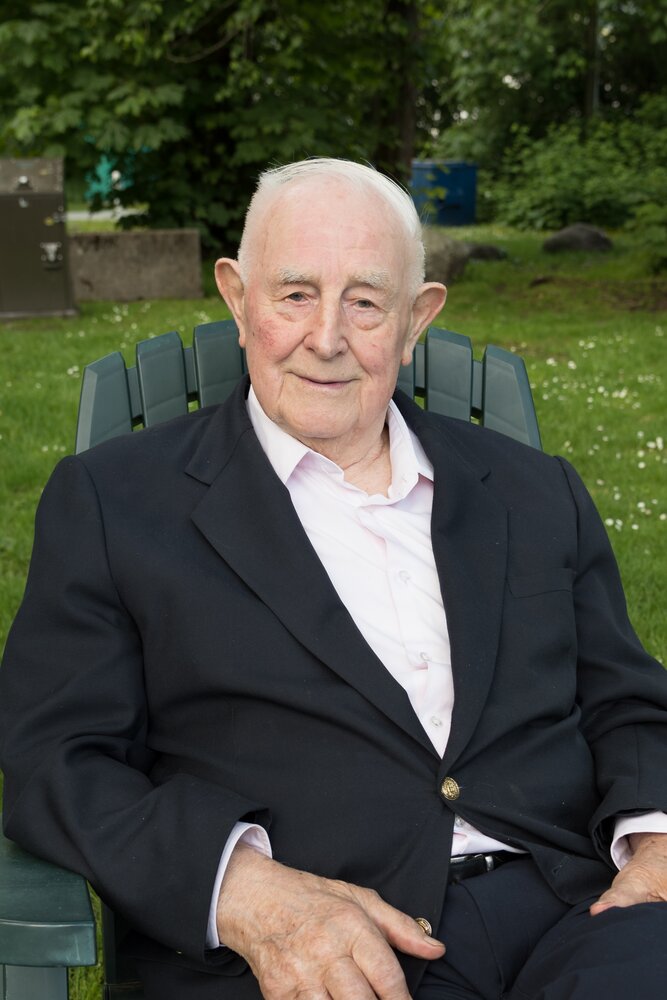 The Day of Departing         “To depart and be with Christ which is far better.”

The day of Mr. David Smith’s departure and entrance into his eternal home has come. His earthly chair no longer needed; his chair in heaven filled. He has moved onto the better place.  He was a father and grandfather, to some a spiritual father and to others a brother in Christ. To some a neighbour and to some a business acquaintance. Dave was a big-hearted man...strong, brave, fearless...a man with a generous spirit...always willing to lend a helping hand.  Dave had a unique way of engaging in warm and meaningful conversations with anyone, of any age, or any walk of life.

David Smith was born June 9, 1928, in Devizes, England and was raised by his grandparents.  At the age of 14, he apprenticed for 2 years as a draftsman at W.E. Chivers, Devizes. At 16 years old his apprenticeship ended so that he could start military training in the Infantry as a foot soldier. During this time, he met his sweetheart, Nina. In 1946, at 18 years old they got married. From Liverpool, they immigrated to Canada and arrived in Montreal, November 5, 1948, on the ship, “The Empress of France”.

Their new life in Canada began with Dave finding work in the construction business. He worked for various companies before starting a business of his own. Eldavina Construction was formed in 1964.  They made Deep Cove their home for 56 years and raised their family of 4 children, Wayne, Yvonne, Tina, and Graeme there. During the early 60’s a Sunday School outreach began in the village of Deep Cove and the children were invited to come by the late Mr. Bill Hague, Mr. Dave Jones & others. Nina agreed to let the children attend and so began the work of God in the Smith family.  In 1959, Nina became a Christian and 2 years later, in 1961, Dave also trusted Jesus Christ as his Lord and Saviour through the truth of Hebrews 13:8, “Jesus Christ, the same yesterday and today and forever”.  This verse was a text which hung over his grandfather’s mantelpiece in his childhood home.  Dave went on to live out his faith with a keen desire to win souls for Christ. It is a great comfort at this time, to know the truth of II Cor. 5:8 “...to be absent from the body and to be present with the Lord.”

Predeceased by his loving wife, Nina & dear grandson, Daniel in 2011. David will be forever loved & missed by his 4 children/spouses, 12 grandchildren, 23 great grandchildren and 2 more on the way.

This event will be recorded and livestreamed.

Dial by your location

To send flowers to the family or plant a tree in memory of David Smith, please visit Tribute Store
Thursday
14
July

Share Your Memory of
David
Upload Your Memory View All Memories
Be the first to upload a memory!
Share A Memory
Send Flowers
Plant a Tree