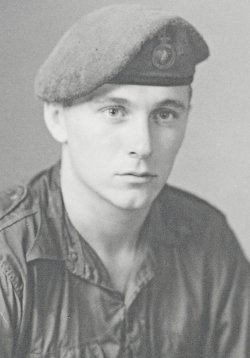 April 28, 1932 to April 26, 2019 Our beloved husband, father, grandfather, brother and uncle passed away peacefully on Friday, April 26 in Maple Ridge, BC, two days before his 87th birthday. The fourth of ten children born to John and Mary (Fedorko) Chiupka, Orest leaves his wife of 66 years, Jessie (Pelletier), daughter Karen Topham, son-in-law Reg, and grandchildren Adam and Jordan Cuipka (mother Victoria) and Lauren and John Topham. He is survived by one sibling, sister Jessie Rowan in Toronto. He was predeceased by his two sons, Gerald (2018) and John (2010). Born and raised on a farm in Dauphin, Manitoba, Orest left for Winnipeg after graduation and it was there that he met his adored Jessie when they both worked for Eaton’s department store. He moved to Toronto, where his natural athletic ability and skills from his high-school football days earned him an opportunity to try out for the Toronto Argonauts. It was in Toronto that Orest enlisted in the army in 1950. As a soldier in Princess Patricia’s Canadian Light Infantry, he was decorated for his service in the Korean battle of Kapyong, one of the most famous actions fought by the Canadian armies. After being discharged from the army in 1952, Orest joined Jessie in Vancouver, BC, where they were married on November 15, 1952. In 1967, the Cuipka family moved to Maple Ridge. He loved his job with the Canadian Pacific Railway, where he worked as a conductor for thirty-seven years before retiring in 1989. In retirement, Orest became an avid skier and cyclist, often taking daylong biking trips to the United States and Fraser Valley. He and Jessie travelled to Europe, visited Reno often, and were well-known bingo enthusiasts in Maple Ridge. Orest was an honest and humble man, a social justice warrior who will be remembered for his great intelligence, political acumen, keen wit, and devotion to his family. He was an honourable and compassionate being who taught us the value and importance of hard work, fair play, charity, and respect for all men. We will miss his lively debates. The family would like to thank the staff at Baillie House for their kindness and care given to Orest over the last nine months. A Funeral Mass will be carried out at 1:00 p.m. on Saturday, May 11 at St. Patrick’s Catholic Church, 22561 121 Avenue, Maple Ridge.

Share Your Memory of
Orest
Upload Your Memory View All Memories
Be the first to upload a memory!